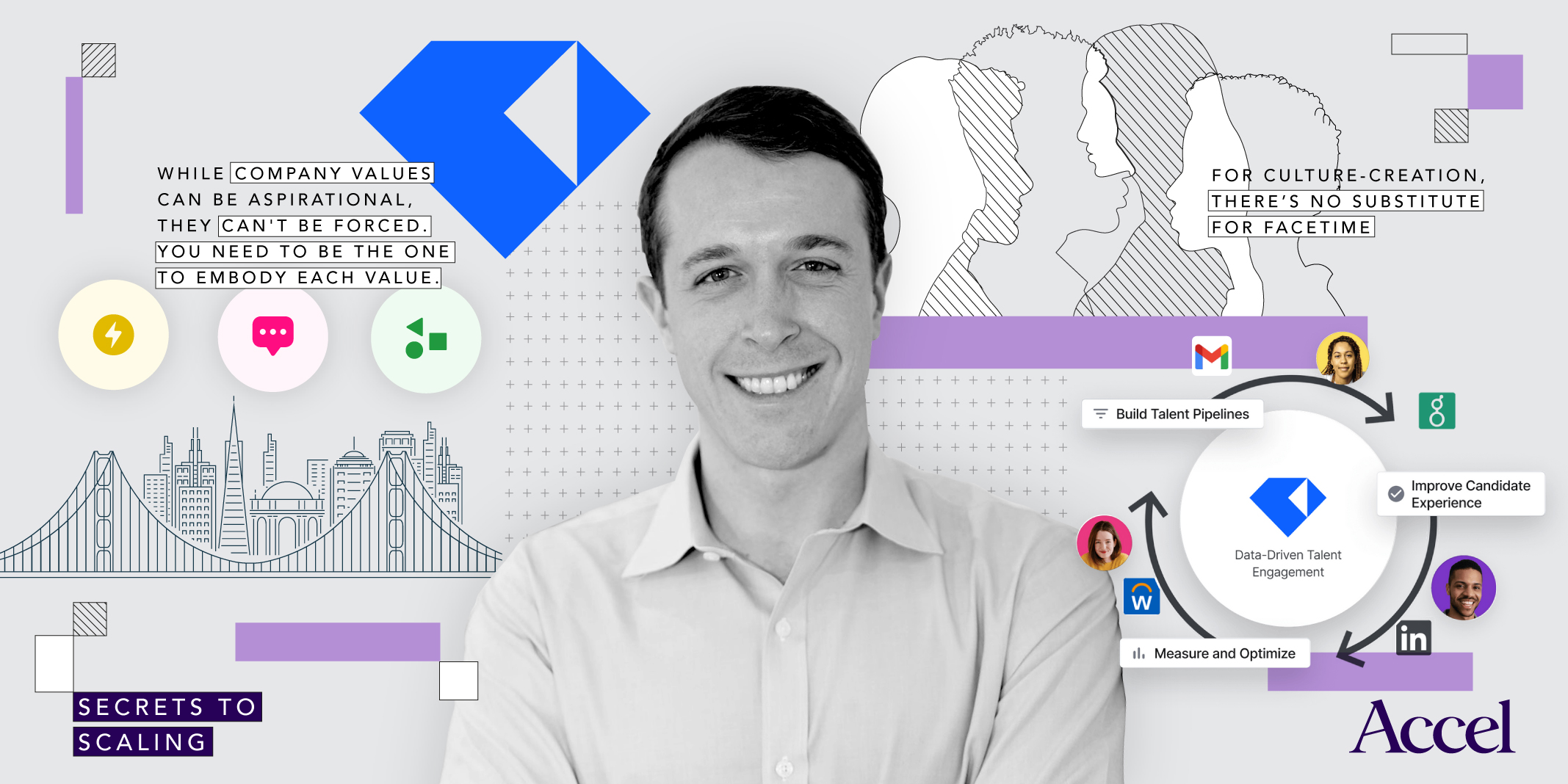 A decade ago, Steve Bartel was an early employee at Dropbox. It was a period of high growth and Steve knew recruiting the next Dropbox-er was one of the most important things he could do. But they were dealing with an all-too-common challenge: hiring.

Steve went on to launch Gem, an end-to-end recruiting solution, with Nick Bushak in 2017. In 2018, Accel first partnered with Steve and the team for Gem’s seed round, and they have made impressive headway since. Last year, Gem raised its Series C, and today, the platform is used by more than 1,000 companies, 130 "unicorns,'' as well as five of 2021’s largest IPOs.

We sat down with Steve to discuss the following: 1) launching Gem, 2) establishing company values, 3) raising capital, 4) the evolution of his role, 5) the hiring market, and 6) the future of recruiting. Our discussion could not be more timely given the challenges every organization is currently facing when it comes to recruiting talent – so let’s dive into it.

Let’s start at the beginning, back when you were working at Dropbox. What was the experience that prompted you to launch Gem?

I joined Dropbox when it was 25 people and we were just entering that growth phase. For context, four and a half years after I started, the company had grown from 25 people to 1,500. In these early days, hiring was everybody’s top priority – but I leaned into it more than most. As an engineering manager, I knew one of the highest impact things I could do for the company was to bring on more great people to my team, so we could increase the impact and the scope of all the things we could build. I partnered with the recruiting team to facilitate tons of interviews and campus talks and ultimately helped close 50-100 candidates.

Then in 2013, I petitioned to start a data science team at Dropbox. I talked to our VP of Engineering, and he said, “That's great Steve, go ahead and start a data science team. Our recruiting team is strapped for bandwidth so why don't you go hire them?” So, I rolled my sleeves up and for about a year I did all my own sourcing and was my own full-cycle recruiter. I became intimately familiar with the pain points that recruiters and sourcers deal with every single day. I’m grateful for this challenge – it would have been impossible to design Gem to authentically solve problems for our customers without my own first-hand experience.

When my now co-founder, Nick Bushak, and I decided we wanted to leave our roles to start a company, we looked at the enterprise technology that had been built over the past decade, and realized that there were amazing solutions for marketing and sales teams, but not recruiting and sourcing. We decided to build it, and that became Gem.

Your team at Gem established company values when you were less than a dozen people. Why did you choose to prioritize that and what was the process?

There were two main reasons we aligned on company values from the start. Firstly, we just hired such thoughtful individuals as part of our early team that really cared about values. Nick and I did too. Secondly, we’d just raised our Series A from Accel and knew we were going to grow a lot over the next few years. We wanted to cement our values so we could preserve the culture that we had in the early days throughout our hyper-growth stage.

In terms of the process, whenever I'm faced with something new, my process is always to talk to people who have done it before. I called up four or five CEOs and learned about what the value-creation process had looked like for them: where had they gone wrong? What did they do right? This helped us avoid some of the common mistakes when aligning on values. I learned that while company values can be aspirational, they can't be forced. You need to be the one to embody each value. I also learned that less is more. When you have too many values it actually dilutes the impact of each.

The four values we aligned on at first – diversity, customer focus, transparency, and velocity – are still our values today.

What do you wish you’d known when you first raised capital?

I wish I’d truly understood the importance of surrounding myself with great CEOs in the B2B SaaS space that I could learn from. This is something that I learned a little bit later along the journey.

I also learned that if you can bring really great strategic angels with experience in your space, people who are invested in your business, they’ll be tremendously helpful. I wish we’d done this in the seed round, but in every round since, we've prioritized the involvement of current and former B2B SaaS CEOs who I can get guidance from.

How has your job as a CEO evolved as Gem scales?

As Gem has grown, I've come to believe there are three really important pieces to my job as CEO that only I can do: 1) hiring and managing our executive team, 2) investing in culture, and 3) setting the strategy so we’re all rowing in the same direction. For everything else, I lean on other experts in the business and I focus on empowering them.

Investing in culture can sound elusive, but I make sure to participate in actionable ways through participation in our all-hands meeting, facilitating roundtable discussions, hosting AMAs, and having 1:1s with our leadership team (including non-direct reports). For culture-creation, there’s no substitute for facetime.

Today, we’re facing a hyper-competitive hiring market. Even so, you’ve attracted world-class executive talent and have been able to scale your team. What advice would you give to founders struggling in this area?

The number one piece of advice I would give is that you need to spend two to three times more time on hiring than you think. Hiring is really hard. And if you're not putting the hours in, you're just not going to get the results.

In the early stages, you won’t have much inbound interest. A lot of hiring will come from your network because you don't have a talent brand yet. You, your co-founder and your team need to hustle – get out there and talk to the best and brightest people you know. At some point, you start to exhaust your network, but the talent market will probably still not know who you are, so you can’t lean on inbound. That's where sourcing becomes really important. For a lot of the growth stage startups that we partner with it's extra important to start to ramp up sourcing.

The final thing that I’d advise is to think about diversity from day one. That's something that we really started to lean into when we were around 10 or 11 people. In fact, it came out of our values exercise. Especially because if we could figure out how to hire a diverse team, then we could teach all of our customers how to do that well.

As we invested so much in building a diverse team early on, it laid the foundation which has made it much much easier to continue to prioritize it over time. Today, we’re lucky to have 47% of our employees identifying as women or nonbinary and 18% of our organization identifying as black or LatinX, which is more than double the industry average.

We're in the middle of a big shift for recruiting. Traditionally, companies would post a job, wait for people to apply, and hire them through an interview process. But companies are now embracing a more proactive model where they're actually finding talent and meeting them where they are, which is often when they’re not necessarily looking for a job. It's starting to look a lot more like sales and marketing: You wouldn't wait for a customer to come and find you, but you would go and engage with and sell and market. I think that trend is going to continue.

In short, I think in a decade, recruiting will have transitioned from a passive act to one that's much more proactive. It's going to look a lot more like sales and marketing: highly strategic and driven by data.

For more Secrets to Scaling, read our interviews with leaders at Chainalysis, Spotify, TradeRepublic and more. 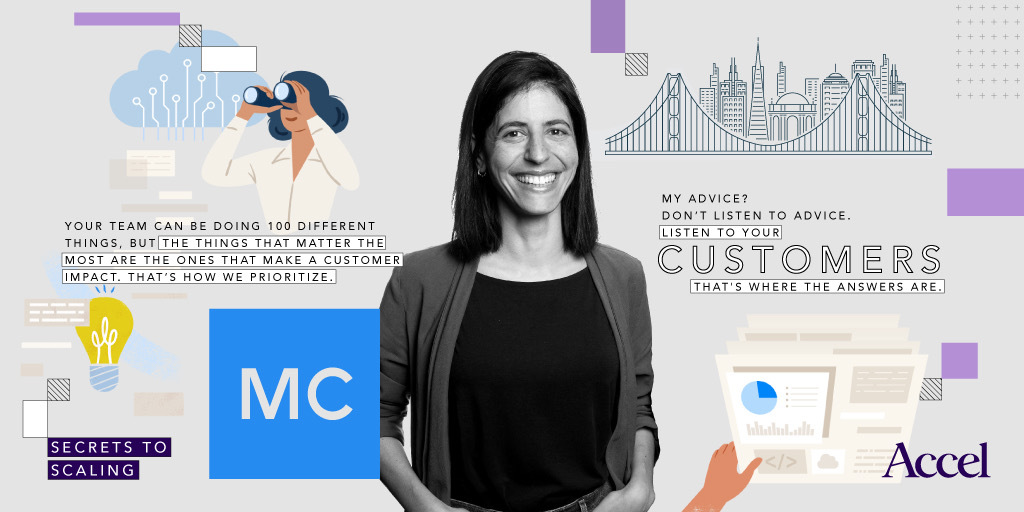